So that I can keep posts organized a little bit for myself and for anyone following along, I think I’m going to title some of the themed posts with the theme and a post number so we can follow our progression on that particular theme. This post’s theme is socialization! NOTE: socialization is so much more than simply introducing a puppy to other dogs. We often think socialization only happens by meeting new dogs, but puppies need to be socialized to new environments, new people, new behaviors, and to anything you want them to be able to do politely as adult dogs (grooming, being on leash, nail trims, resting in a kennel, going to the vet, riding in the car, etc).

Kanyon is actually just finishing out his 8th week – he will be 9 weeks tomorrow. Here are some of the things I have been thinking about and working on this week with him. You will notice that this early in his puppyhood, I am not at all concerned about “obedience.” An 8 week old puppy, typically, will be very interested in following humans around. They don’t usually have a huge sense of independence yet, so their exploration of their world tends to follow in line with whatever their humans do. This is important to note, especially during COVID – if you have a puppy and you aren’t getting out much yourself, you really need to be intentional about doing what you can to get your puppy some new experiences. It doesn’t have to be around a lot of other people, but as much as you can, you really need to find ways to introduce your puppy to new things, or they are going to miss out on all of their early formational social skills!

Kanyon mostly follows me wherever I go, and I have been allowing him to have some level of choice in the matter. I did carry him a lot earlier in the week, but as he’s gotten more comfortable with me and with his environments, I’ve allowed him to walk more and follow me more. I like to try to give my puppy as much choice as I can, within reason. Obviously, I’m not going to let him chew on power cords or tear up things he shouldn’t, or eat things he shouldn’t, or jump off the couch yet, etc. But, I also want to help him develop his confidence by allowing him to make choices as much as possible. I also want to encourage as many positive choices as I can at this point.

Kanyon struggled at the beginning of the week with taking treats, so I just started trying to introduce treats a bit more in the last couple days. He is doing better now taking and eating small bits of treats, and he’s more motivated to work for treats now. That’s helpful in situations that he might feel a little nervous about, or to start teaching him some fun things, or to reward behavior I like and want to see more of. 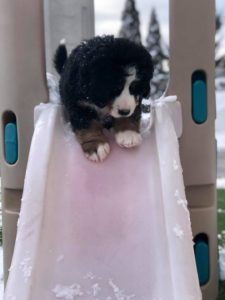 Some of the things I’ve been working on introducing to him this week include:

It’s really hard for me to remember that’s he’s still very much a baby and can’t do everything I want to do with him just yet. I can’t wait until he can though! His first week is really all about letting him experience new things as positively as possible, with as much choice in the matter as possible. I want him to become confident, and I want him to be allowed to make choices at this stage because as he gets older, I want to make sure I’m rewarding the choices I like. If he starts making choices I don’t like as much – as all puppies do – then we start more heavily rewarding the choices I like better.

Kanyon’s confidence has definitely grown in just his first week with us. During his next week, we will bump up our socialization opportunities a bit more and really start getting him some more unique socialization experiences!

Thanks For Reading:
Socialization – 8 weeks