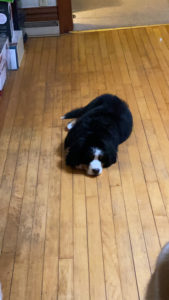 OK y’all,I had an amazingly well-adjusted, happy-to-meet-everyone puppy until one week ago. Suddenly my happy, confident puppy started to become fearful about new people – particularly when we were out walking around town. What happened?!

A fear period happened. His breeder did say she was hoping they’d go through their first fear period while they were still with them. But, they didn’t. So Kanyon is going through his first fear period now. It started when he was about 13 weeks old. So what does this mean? I’ll start by telling you what I started to notice about his behavior, and then I’ll talk about what I’m doing to work on it with him.

About two weeks ago, Kanyon was finally old enough and big enough to start going for walk short leash walks. (It also warmed up enough that I could tolerate being outside and giving treats!) He started out doing really well, but there weren’t a lot of people out and about because it was still so cold. So we didn’t see many people the first couple walks. We did walk with our Springer friends so it was helpful for him to be able to walk with other dogs. About 1.5 weeks ago, it warmed up even more, and we walked a couple of times when we did see other people out and about. Kanyon did awesome, but didn’t get to say hi to anyone.

Approximately one week ago (so about 13 weeks of age), Kanyon started to see more people while we were out walking, and he very abruptly started to be more cautious and concerned about new people. He would give off a couple low, concerned “woofs” when seeing people from a distance, and he would crouch low with his tail low when people would approach or try to pet him. This is completely opposite of his behavior any time he met new people in any context previously. I registered almost immediately that this was a fear period, so I knew I couldn’t just ignore it and I had to make a training plan for him. 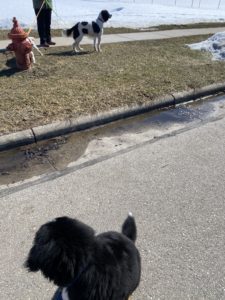 One thing I preach to my puppy training clients regularly is that they don’t have to spend every waking moment “training” their puppy. And this is true – there’s much more to training, enrichment, and socialization than spending hours upon hours training. BUT, this is an important hurdle for me to work on with him because my hope for him is that he is confident going into a number of different social situations. So, my plan for him didn’t involve training every second of the day. But it DID involve working on it EVERY day, at least once, and sometimes multiple times, in different contexts. Sometimes I wanted him to be in a context where he was already comfortable with people (for example, at the daycare, or at the coffee shop we frequented the weeks before the fear period started). Other times, I wanted him to be in a novel environment, or a novel situation in a familiar environment.

We happened to be staying at my mom’s when all of this started, so we practiced going for walks in her community and I focused on changing my walking route as I saw people out and about. We got lucky many times that her neighborhood is relatively dog-savvy. One older woman, all bundled up, asked if she could say hi. After I explained that he’s been a little shy about new people, she crouched down and pulled a treat out of her pocket and offered it to him. This was literally the best-case scenario, and I am so grateful she was able to help us in this way! We saw people from a distance, we saw people with strollers, we saw kids, and we saw people with dogs. He got to meet a couple of safe dogs on leash, some people wanted to say hi to him and others we just saw from a distance. The key was to make sure he was always able to choose not to say hi if he didn’t want to. And, even more importantly, he needed to feel supported by me – the human he did trust. I crouched down with him whenever I could to help him feel supported. Sometimes I would stay down with him, and other times, once he seemed to feel a little braver, I would stand up and see if he would choose to say hi.

We repeated these techniques in our home community, at the daycare, at the local pet store, at the local Ace Hardware, in the Walgreen’s parking lot, in the park, by the lake, etc etc etc. We sometimes walked with his dog friends, and we sometimes ventured out alone. We are continuing this process still, and he has improved and become more confident again! We cannot stop now though! In all honesty, socialization and regular interactions will be a part of our training plan for a long time to come, because dogs can lose skills over time if they aren’t able to practice them. I admittedly feel like I made this mistake with Lyra. She began to develop dog reactivity issues around 8 months old (which was likely a fear period for her also and I didn’t recognize it as such at the time). Instead of working through it, getting her out and setting it up so we could see dogs from a distance and work through it consistently, I kept her home more and she never got over it. She may not have gotten over it anyway – I do believe there’s a genetic component for her because her mom, Lacey, also has issues with other dogs. But, I don’t know for sure because I simply didn’t work on it with her.

I will give an update on how this plan is coming along for Kanyon, and I’ll try to get some better pictures of us out and about – I forget to do this when I’m working with him but I’ll work on doing better for this blog! 😉

Thanks For Reading:
Let’s Talk About Fear Periods!