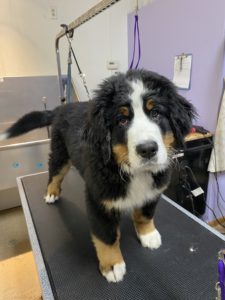 Kanyon before his groom

As part of his early socialization, one of the things I wanted to make SURE we focused on was grooming! Kanyon has a lot of hair even as a puppy, and he will have a lot of hair for the rest of his life. His hair will change as he gets older from the soft down fur he has now to a more coarse coat with significant undercoat. So we need to be comfortable with the entire process of grooming: nails trimmed and ears cleaned, paw pads shaved out, sanitary areas clipped, brushing, bath, blow drying, more brushing, trimming, and… did I mention brushing? 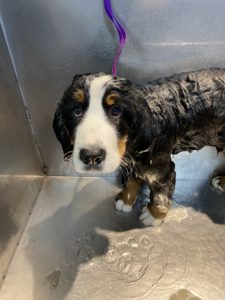 Kanyon in the bath

In a perfect world, all puppies would be introduced to grooming at least once during their critical period (before about 14 weeks of age). Puppies who will need hair cuts or who have long coats like Kanyon should ideally have more than one “groom” – even if not a complete groom – before 14 weeks old. One concern that many owners with breeds that will eventually need a hair cut have is that they like the fluffy puppy look. They don’t want to get them groomed because they don’t want them to have a haircut yet. There are two problems with this: 1) these dogs don’t get used to the grooming process but they will need to do it their whole life so they really need to be introduced, and 2) the parents don’t realize that as the adult coat grows in, the hair underneath the puppy coat is matting to their skin. So, their first groom ends up being horribly stressful because they didn’t get introduced to the sights and sounds early, and not they are matted so their first time being introduced to the scary process is also painful. 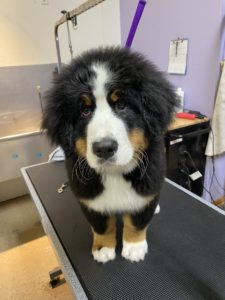 Kanyon after his groom from the front

So, while I know most of you really want to know about Kanyon’s grooming experiences, I would be remiss if I didn’t talk about grooming in general. So let me digress for a moment and share a little about the grooming process and why, in my professional opinion as a dog trainer, groomer, and dog daycare owner, grooming is arguably one of the most stressful things we ask our dogs to do.

So bottom line – please get your dog groomed early and often – the more it can become a routine for them, the better. 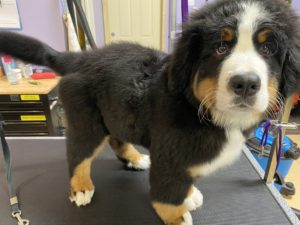 Kanyon after his groom from the side

Where is Kanyon at with grooming, especially considering his fear period he’s going through? He’s actually doing quite well with this activity, but that’s partly because he has been groomed three times now and he’s just turned 14 weeks old. I groomed him once around 9 weeks, then a couple weeks later I took him to another local groomer so he could be handled by someone else, and I just fully groomed him again this past weekend. The most recent grooming experience was a little harder for him at first, I think mostly because he is dealing with a fear period right now. But also because as they get older, they go through periods where they get frustrated and would prefer to be playing or doing something else. I used quite a few treats as reinforcement during this groom, and he settled in and was more comfortable as we got further along in the process.

If you want to see the video of me drying him, you can watch it here. Overall, I’m really happy with his progress and I’m confident he will do great for grooming if we stick with it and continue to work on it regularly. 🙂

Thanks For Reading:
Groom, Groom!